Discovering Hampden Estate is like embarking on an exceptional journey to encounter a unique rum, rich from an authentic and secular heritage, true to an ancestral recipe nestled in the heart of Jamaica’s luxuriant nature.

Hampden Estate is far more than just a name on a label: it is first and foremost a place steeped in history. In the heart of the island, surrounded by nature with rare birds and wild animals, visitors arriving at Hampden Estate could almost believe they have gone back in time: facing the long alley of palm trees that leads to the distillery, it literally seems as though nothing has changed since the 18th century. Hampden Estate is one of the only Jamaican distilleries that has never stopped operating for more than two centuries: the years have gone by, its owners have succeeded one another, but its philosophy has always remained unchanged.

The earliest written record mentioning Hampden Estate dates back to 1753. At that time, the estate was owned by a family of Scottish origin, the Stirlings, who were cane growers, sugar and rum producers. By 1767, Hampden Estate was already producing over 50,000 litres of rum a year, mainly for export to England and Scotland. One hundred years later, the estate was bought by George McFarquhar Lawson, who introduced a unique method of production. It gave birth to the most aromatic rums in the world, the Trelawny Rums, named after the region surrounding the estate. Developed in 1852, this style of production became a veritable trademark for Jamaican rum. 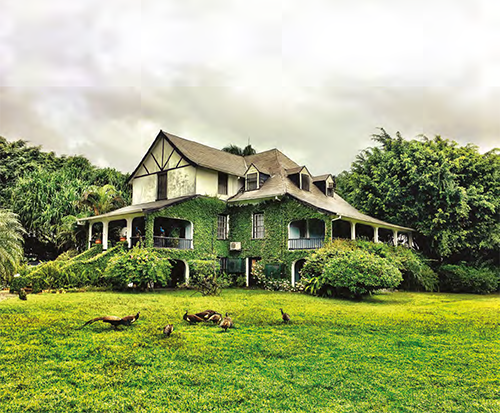 The Lawson family remained the owners of Hampden Estate until 2002. After being bought by the Jamaican government, the cane exploitation ceased in 2003. The distillery continued to export its rum, but always in bulk. In 2009, the Hussey family bought the estate with the strong desire to preserve its ancestral production methods. They decided, for the first time in the history of the distillery, to age casks on site with the idea of creating the first official bottling. In 2018, the first bottles of aged rum bearing the name of Hampden Estate were finally exported, 265 years after the creation of the estate, and became proud ambassadors of the unique production methods used at the distillery since 1753. 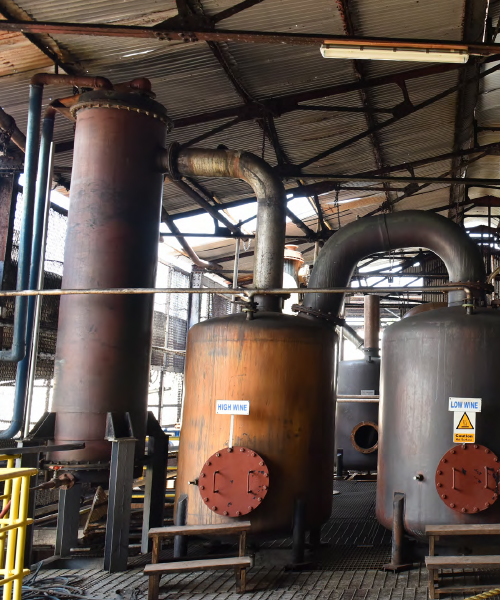 Hampden Estate is one of only two remaining independent distilleries in Jamaica and is often considered to be of the best in the world. Its authentic approach, both demanding and traditional, gives birth to the singular and artisanal philosophy that makes a great rum. Often compared to the best whiskies and eaux-de-vie, Hampden Estate rums are distilled in small batches in copper pot stills, just like the best single malts or the greatest vintage Cognacs.

In 2009, Hampden Estate entered a new era: for the first time in its long history, the distillery began to age its own rums on site, in order to bottle them in-house. These now proudly display their full name. Hampden Estate’s official bottlings have truly become must-haves for all rum lovers. A preserved ancestral method and total transparency on natural raw materials naturally give birth to an exceptional rum.

THE GARGANO CLASSIFICATION:
WHAT IS A PURE SINGLE RUM?

The classification invented by Luca Gargano, a world-renowned expert in the world of rum, is based on the different ingredients and distillation methods used to make sugar cane-based spirits. The rums produced at Hampden Estate are made from molasses and are distilled in copper pot stills, which defines them as Pure Single Rums.

THE 5 PILLARS OF HAMPDEN ESTATE

1
SPRING WATER
Preserving the tradition
Water is a fundamental element in defining the taste and personality of Hampden Estate rum. Its source is just a few kilometers from the distillery, an unspoiled reservoir in the unique geography of Cockpit Country. Limestone soil makes this water some of the purest in the world.
2
NATURAL YEASTS
Creating the flavour
The wild fermentation process is the key to the unique aromatic profile of Hampden Estate rum. It follows ancestral techniques from the 18th century, only using the native, ambient yeast present at the distillery.
3
100% POT STILL
Capturing the taste
Hampden Estate is one of the last surviving distilleries that continues to use only copper pot stills for batch distillation. Discontinuous distillation is the best way to capture the essential flavours of Hampden Estate.
4
TROPICAL AGING
Enhancing the complexity
Hampden Estate rum has been aged for more than eight years in the hot, extreme conditions of the distillery’s warehouse. The tropical climate of Jamaica means that eight years of aging at Hampden Estate are equivalent to about 25 years in Europe.
5
NO SUGAR ADDED
Ensuring the authenticity
Hampden Estate rum is truly genuine and natural. It is fermented, distilled, aged and bottled without any additives: no sugar, sweeteners or colouring agents have been involved during the rum making process.

This term refers to powerful tropical notes. Jamaican rums are associated with this expression, which reveals all their strength of character and exotic nature. Originally, most Jamaican rums are inherently funky, which means that they express captivating and pronounced aromas.
2
HOGO

This Jamaican slang word is inspired by the French «Haut-goût» and refers to a cocktail of bewitching fragrances and incomparably intense flavours. An ancestral expression that describes the pronounced taste of the fermentation style of Jamaican distilleries, underlined by the presence of the famous esters that give it particularly complex aromas.

Thanks to their unique aromatic profile, Hampden Estate rums appeal as much to seasoned connoisseurs as they do to neophytes, from refreshing cocktails to special occasions, from pastries to the pleasure of a last glass to be savoured at the end of the evening. Their remarkable complexity gives them great versatility and allows them to shine on many different occasions. Hampden Estate really represents a new frontier in the world of rum thanks to its incredible versatility. 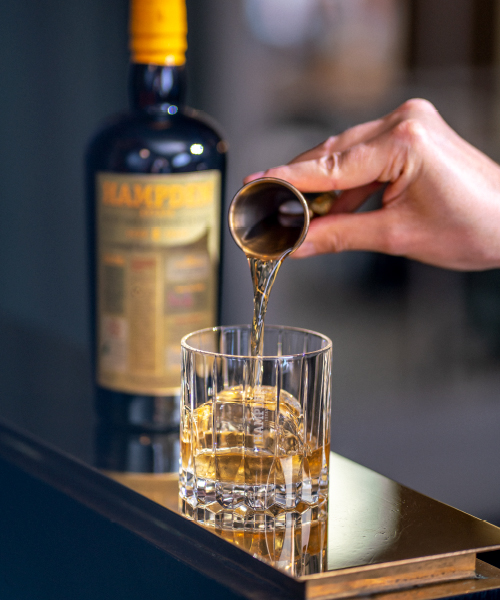 In an old-fashioned glass, poured over a large ice cube, Hampden Estate gets along wonderfully well with cool temperatures: its texture turns velvety and dilution makes the experience most enjoyable. With its higher alcohol content, the aromatic profile of Hampden Estate Overproof is also enriched by the dilution and its palate softened by the freshness of this mode of consumption. 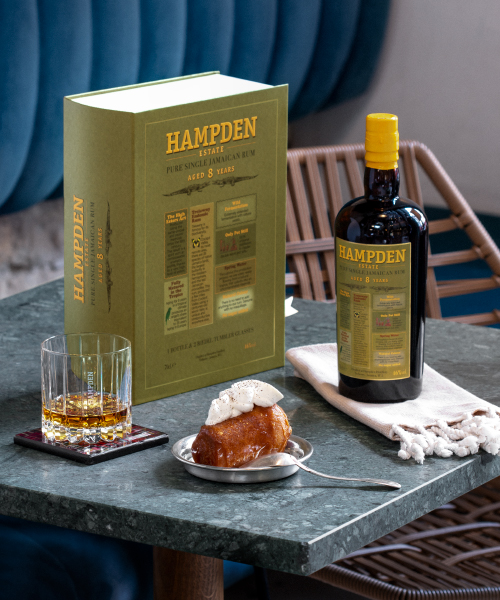 Countless food pairings can be enjoyed, from a piece of dark chocolate to a perfectly brewed cup of coffee. Pairing with a rich, full-bodied cigar also proves to be an elevated experience. Preparing a Hampden rum syrup is a great way to make your favourite dessert recipe exceptional. A natural match with a traditional Jamaican cake, waffles or a decadent topping on a cup of vanilla ice cream. 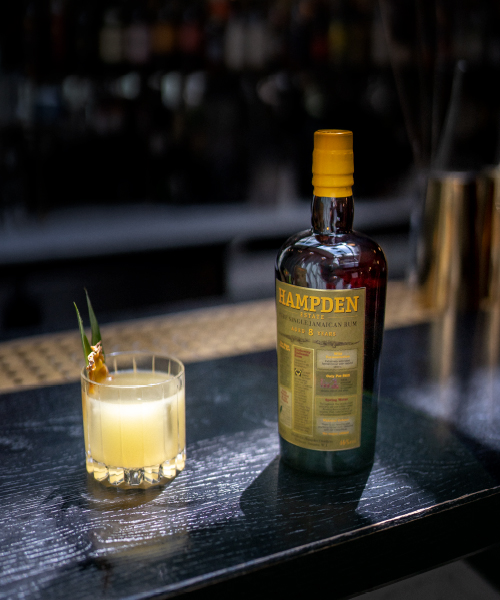 Classic cocktails or original creations are also great ways to enjoy Hampden Estate. Whether it’s for a simple, easy-to-make drink or a more sophisticated one, the true adaptability of Hampden Estate rum shines through and gives an authentic touch to many cocktails, rum-based or not. 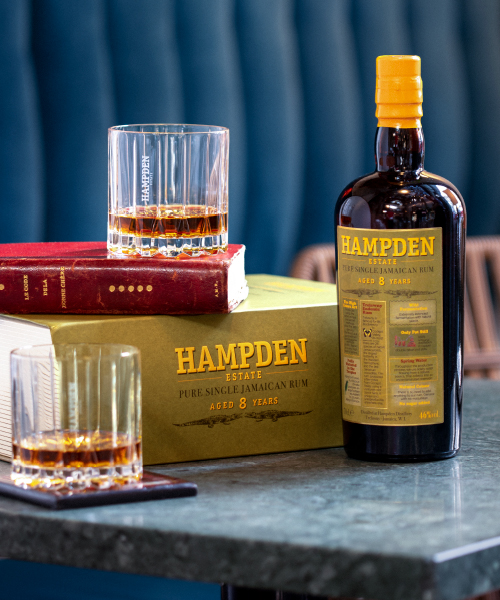